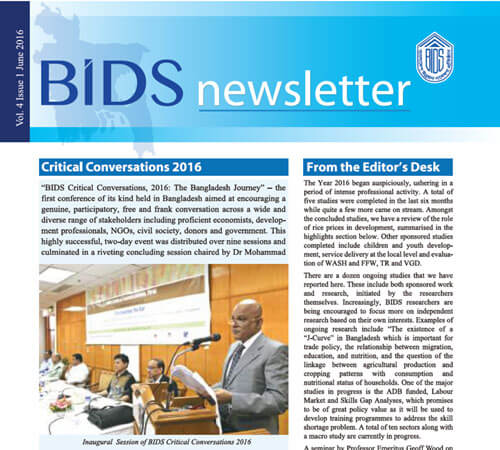 The Year 2016 began auspiciously, ushering in a period of intense professional activity. A total of five studies were completed in the last six months while quite a few more came on stream. Amongst the concluded studies, we have a review of the role of rice prices in development, summarized in the highlights section below. Other sponsored studies completed include children and youth development, service delivery at the local level, evaluation of WASH and FFW,TR and VGD.

There are a dozen on going studies that we have reported here. These include both sponsored work as well as research, initiated by the researchers themselves. Increasingly, BIDS researchers are being encouraged to focus more on independent research based on their own interests as well as policy specific. Examples of ongoing research include “The existence of a “J-Curve”in Bangladesh which is important for trade policy, the relationship between migration, education, and nutrition, and the question of the linkage between agricultural production and cropping patterns with consumption and nutritional status of households. One of the major studies in progress is the ADB funded, Labour Market and Skills Gap Analyses, which promises to be of great policy value as it will be used to develop training programs to address the skill shortage problem. A total of ten sectors along with a macro study are currently in progress.

A seminar by Professor Emeritus Geoff Wood on “The security of Agency: Towards a Sociology of Poverty”, was held in March, 2016. The talk dwelt upon the dependency of the poor upon the powerful in society as a strategy to secure their well-being. The seminar provided a rare opportunity to the audience to listen to a non-economist’s perspective on poverty and security.BIDS continued to invite eminent speakers to BIDS through its Sunday Talk series.
BIDS, in collaboration with the Washington-based IFPRI, has also won a 5-year contract through open bidding and is poised to embark on fresh research on key food policy issues related to storage and food management. Given the huge demands being placed on BIDS researchers, there has been a felt need to go for a recruitment drive not just at entry level but at all levels. To this end, initiatives have been taken to employ new researchers at senior research positions while continuing the drive to recruit talented young researchers at entry level. I should also note that BIDS now has a brand new website which we hope will meet with the approval of our stakeholders.