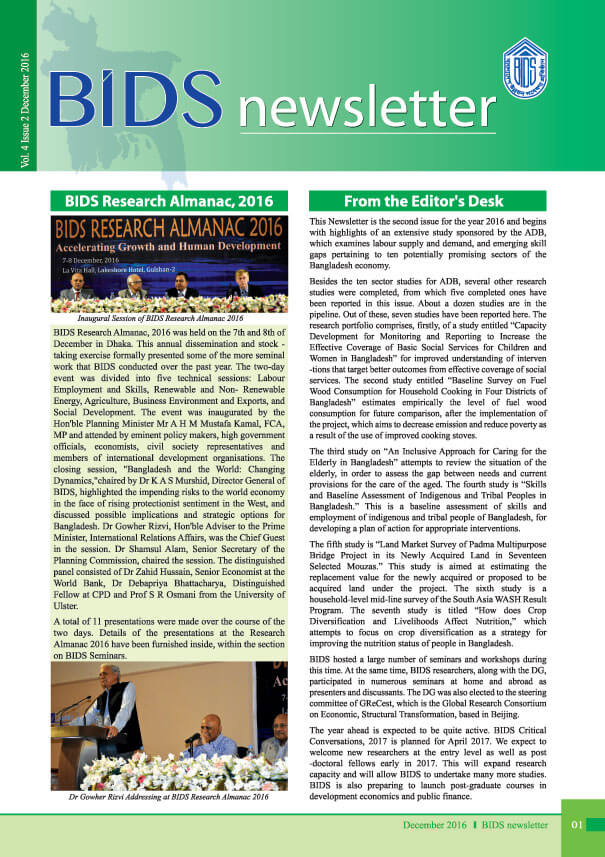 This Newsletter is the second issue for the year 2016 and begins with highlights of an extensive study sponsored by the ADB, which examines labour supply and demand, and emerging skill gaps pertaining to ten potentially promising sectors of the Bangladesh economy.

Besides the ten sector studies for ADB, several other research studies were completed, from which five completed ones have been reported in this issue. About a dozen studies are in the pipeline. Out of these, seven studies have been reported here. The research portfolio comprises, firstly, of a study entitled, “Capacity Development for Monitoring and Reporting to Increase the Effective Coverage of Basic Social Services for Children and Women in Bangladesh”  for improved understanding of interventions that target better outcomes from effective coverage of social services, sponsored by UNICEF and implemented by IMED. The second study entitled, “Baseline Survey on Fuel Wood Consumption for Household Cooking in Four Districts of Bangladesh” estimates empirically the level of fuel wood consumption for future comparison, after the implementation of the project, which aims to decrease emission and reduce poverty as a result of the use of improved cooking stoves.

The third study on “An Inclusive Approach for Caring the Elderly in Bangladesh” attempts to review the situation of the elderly, in order to assess the gap between needs and current provisions for the care of the aged. The fourth study is “Skills and Baseline Assessment of Indigenous and Tribal Peoples in Bangladesh.” This is a baseline assessment of skills and employment of indigenous and tribal people of Bangladesh, for developing a plan of action for appropriate interventions.

The fifth study is “Land Market Survey of Padma Multipurpose Bridge Project in its Newly Acquired Land in Seventeen Selected Mouzas.” This study is aimed at estimating the replacement value for the newly acquired or proposed to be acquired land under the project. The sixth study is a household-level mid-line survey of the South Asia WASH Result Program. The seventh study is titled “How Does Crop Diversification and Livelihood Affect Nutrition”, which attempts to focus on crop diversification as a strategy for improving the nutrition status of people in Bangladesh.

BIDS hosted a large number of seminars and workshops during this time. At the same time, BIDS researchers, along with the DG, participated in numerous seminars at home and abroad as presenters and discussants. The DG was also elected to the steering committee of GReCest, which is the Global Research Consortium on Economic, Structural Transformation, based in Beijing.

The year ahead is expected to be quite active. BIDS Critical Conversations, 2017 is planned for March, 2017. We expect to welcome new researchers both at the entry level as well as post-doctoral fellows, early in 2017. This will expand research capacity and will allow BIDS to undertake many more studies. BIDS is also preparing to launch post-graduate courses in development economics and public finance.